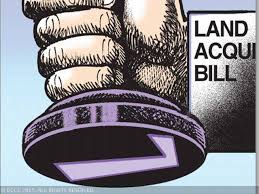 Information received from the Finance Ministry through RTI calls the bluff of government claims.

A big question that is begging a credible answer today is- why is the National Democratic Alliance (NDA) government hell bent on road rolling amendments on to the land acquisition law without even implementing it despite vociferous opposition from several quarters.

Several spokespersons for the government and the political parties which support it have repeatedly said that the amendments to the Right to Fair Compensation and Transparency in Land Acquisition, Rehabilitation and Resettlement Act (LARR Act) enacted by Parliament in 2013, first promulgated as an Ordinance and then re-promulgated because they could not get the approval of Parliament last month, are necessary to arrest the slowing down of the economy and breathing life into the stalled development projects. The mainstay of this argument has been that the process of acquiring privately owned land for developmental projects laid down in the LARR Act is too cumbersome and requires simplification.